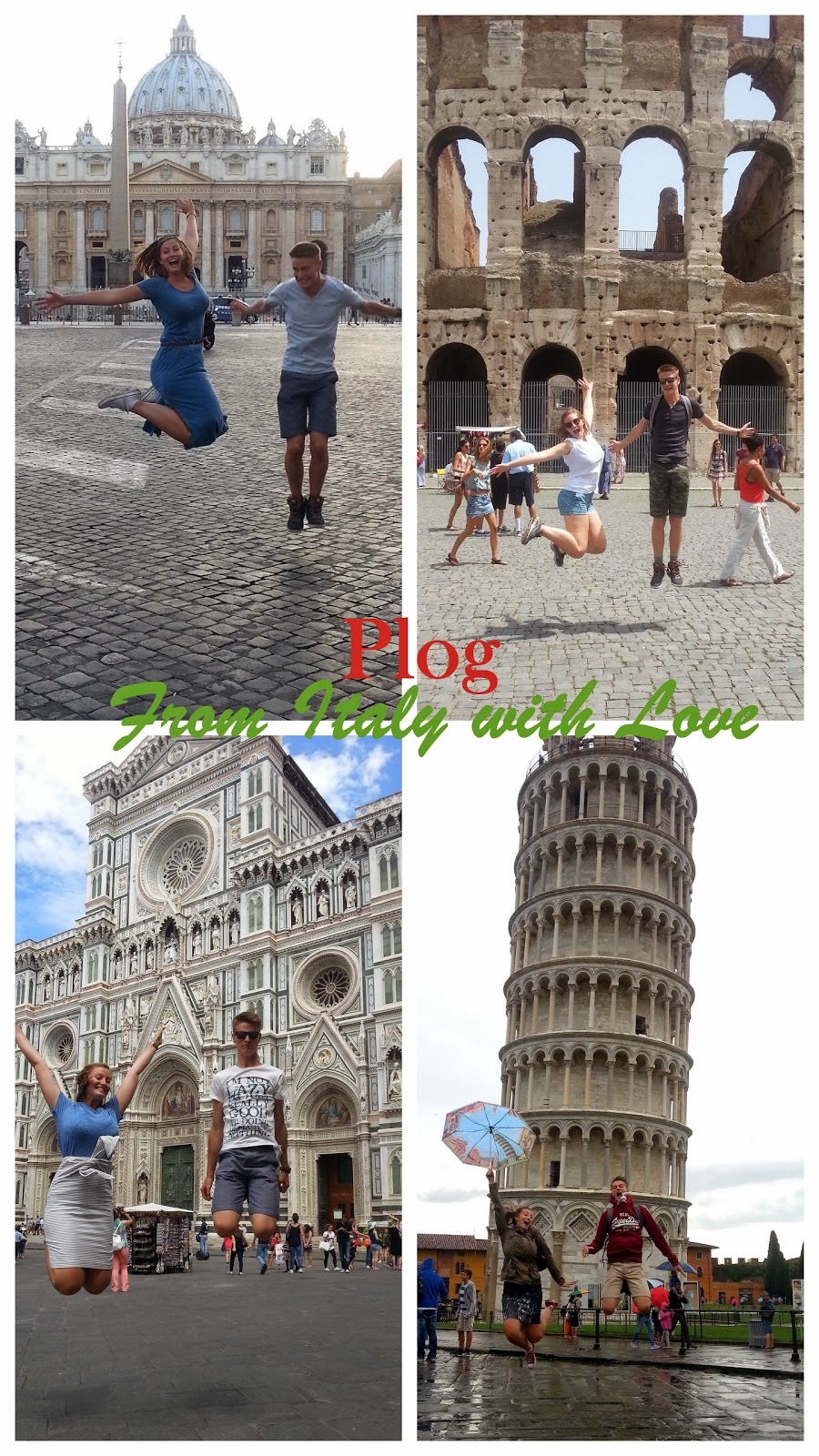 Two weeks of pasta, walking, history and a lot of art. Italy has it all!
This post is a little follow-me-around... Walk with me and enjoy the blisters, haha! Rome The Open Air Museum is to me the best description so far. Our apartment was 20min away on foot from Vatican City, the place where we got dropped off by bus, leaving us in the 34°C heat and with heavy luggage, yuck. When we finally arrived at our apartment after a 10min climb, we were all dripping in sweat and not really excited to get on with the day, haha! We decided to do the green tour: Piazza Navona (where all people get together), the Pantheon (free entry! Just an amazing piece of architecture) and the Trevi Fountain (under construction...).
The next day we got up at 7am to visit the Basilica of St. John; marble, statues, mosaics, painted ceilings,... Just an overwhelming beauty and impressive building! The Vatican Museums and the Sistine Chapel were next on the list, excited I was. After 1,5h walking through several rooms, corridors, exhibitions,... filled with art and history, we were done and wanted to see thé Sistine Chapel. I have to admit, when we finally entered the Chapel, I was a bit disappointed. We were not allowed to take pictures, the room was a lot smaller than I imagined and it didn't struck me with its 'beauty' as I thought it would. Don't get me wrong, it was gorgeous and incredible to see, but I just had higher expectations. After the Chapel there was (apparently) still 1h walking to the exit left, sights. The Vatican Museums were just too much, interesting, but too much. To end the day we went to St. Angelo's Castle, a fortress where back in the days popes used to go in times of war. There is even a connecting path between the Vatican and the castle!

Our last day was by far the most exhausting one, I got blisters and sweated like crazy, haha! We took a hop-on-hop-off bus to Piazza Venezia, a big big square: The heart of Rome's history. The museum situated on the Piazza Venezia reminded me a lot of our own, the Museum of Fine Arts in Antwerp. Again a 33°C heat accompanied us during our visit to the Colosseum, the Foro Romano (those two are one 'museum') and to the Piazza Spagna (we went there using the metro). Piazza Spagna was also under construction (Sephora-alert!) so we decided to walk to Campo de Fiori (the vegetable and fruit market) across the Jewish Carter to end at the Tiberna Isle. There we jumped on a hop-on-hop-off bus again and did the whole "tour" around Rome (I fell asleep...).

Rome is so big and on every corner there is something to see, to wonder, to learn and you have to use your imagination more than once to get a glimpse of the old Roman times...

We rented a car and drove to Loro Ciuffenna, a small village situated in a valley. One week of 4-course dinners was waiting for us, yummy (and I appear to really like Pinot Grigio)! I don't know how many mosquitoes were living in my room, but I left Loro Ciuffenna with a lot of battle scars (at least 6 on each body part...). Since we had a car now, we decided to go to another village/city each day. So we did Volterra, San Gimignano, Siena (gorgeous Duomo: the pink marble!), Arezzo, San Marino (independent republic - a lot of Russians), Cortona (a cute artistic city), Montepulciano (New Moon-alert! - also very artistic) and Loro Ciuffenna. All these villages shared one thing: they were medieval, from Roman to Medieval times!


FLORENCE: A city I could live in Florence, the last stop. Our rather big apartment was situated in the centre, oh yes! After a calm week, we were back for loads of walking! So the first day we did Florence and still had time left to shop (yes again) and I could visit the Uffizi (a museum - €11 adult, €5.50 student and for free -18 years)! I was over the moon!


On Sunday we drove all the way to Cinque Terre, Vernazza. Wow, colorful, happy, calm,... These are only a few words to describe Vernazza. We had to walk a decent kilometer down to get there and saw how a flood had taken a lot with it. Even when we entered the centre, you could see the damage it had done... Afterwards we decided to go to Lucca, a city still surrounded by walls. Again I really liked their Duomo and loved how each pilar was different. But for the rest of the city, we didn't really 'feel' it and decided to shorten our little tour...

Monday we had Pisa on schedule, let's go and take the ordinary look-I-block-the-tower-of-Pisa-picture! When we arrived it was again pouring rain, ugh why did I wanted to wear my new skirt again? But we bought umbrellas and defied the rain! It was too bad Pisa's only interesting place was the main square: the tower (rather small compared to the duomo!), some musea and their duomo (gorgeous again). I didn't mind, I just wanted to go back to the car as soon as possible, haha!

Tuesday we finally flew back home (with a little unforeseen delay in Bologna to get more fuel). At 9pm I devoured my typical Belgian meal: fries! Than I crashed and went to bed...

Coeur Belgique is created by Shannen, a twenty-something year old student from Antwerp, with a huge love for everything beauty, fashion, food, lifestyle and interior related.
Bluntly honest with a hint of sarcasm is the way she shares her opinion about what inspires her or what she tries. A journey through all the things she loves…